I find the concept of food blogging quite awkward. A casual food blogger is not a professional chef, nor is he or she a recipe-writer. (Unless you have the patience to test each recipe until it has reached perfection, e.g. David Lebovitz.)

I personally don’t have that kind of dutiful patience. For example, as much as I enjoyed playing the piano when I was a kid, I got so bored practicing one particular piece until it was faultless.

I am also challenged in a couple more ways.

First, artistically. Beyond stick figures and flow-charts, I have never displayed any kind of artistic talent. If I’ve got my camera out, I’m able to take a couple of decent photos but I have no pretences or leanings towards being a food stylist. If that’s what you’re looking for, let me steer you to Emiko Davies, who has some of the most beautiful food photography coming out of Italy.

Chantarelles and fresh herbs for baking with whole sea bream in a paper-wrapped package. #acquacottathecookbook

Second, practically. I should be telling you about dishes which are easily replicable in your own kitchen. The problem is, my experiences over the last few years living in the UK, France and Italy, have rendered me and my house a unique blend of cultures, tastes and objects. This can’t be a normal food blog because what’s going on in my kitchen is entirely personal and therefore completely unreproducible.

What I have to offer is a sneak-peak into my kitchen and of my life. A form of exhibitionism on my part, I suppose… and voyeurism for you!

Yesterday, I went to the market and went crazy over the beautifully ripe strawberries. They were so fragrant that you could smell them four metres away. I came home with three punnets…

Obviously, when you buy so many, some are better than others. The fresh and firm strawbs will be kept in the fridge for a couple of days and eventually eaten with caster sugar and a little drizzle of cream. For those that are going off, I need to find a way to use them up quickly.

You’re hopefully still following me because this is where it starts getting weird.

I’ve been having cravings for traditional strawberry and custard tarts ever since I smelt the very first strawberries of the season.

The flaw in this plan is that my trusty Magimix was in storage for a year and when it got taken out and finally placed on the kitchen counter last week, it thanked me by taking out my house’s electricity!! It seems to have suffered from the humidity in the storage unit but now I need to replace the fuse and quite possibly also rewire the plug.

I’m also too lazy to make shortcrust pastry by hand. After the stress of the Bakewell Tart (see here), I have better things to do than rub never-ending cubes of butter into a flurry of flour, twice in two weeks. The idea of a tart is out.

In my search for inspiration, in the fridge I find half a tub of mascarpone, some double cream and sour cream (which also needs to be eaten soon.)

There’s also a brand-new, but rather odd, cake tin which has been intriguing me for quite some time. It’s German, from a brand called Kaiser, and it has two layers, neither of which are flat.

I had never heard of tortenboden before. A Google search doesn’t help much either… some sites say that tortenboden is egg-yolk-heavy type of flan, others call for shortcrust pastry (see point #1, the Magimix problem…) and others, purporting to be a tortenboden recipe, tell you to put your cake mixture into a springform pan.  Nope, that won’t do. I need something else.

What about a sponge cake, I ask myself. The sad reality is that an enormous Victoria Sponge would be a waste, because it’s just me and boyfriend. It’s a Thursday morning and there’s no particular special occasion for such indulgence. No, I need to make something smaller. Less sponge, more fruit. Maybe just one layer of sponge…

So I take Patisserie by Christophe Felder. It’s my bible for baking.

As it happens – and really, this is true, cross my heart and hope to die – the book opens upon Lesson #40: Le Fraisier (a strawberry cake.) Incidentally, le fraisier was one of my favourite pastries when I was living in Paris.

At first glance it looked like it was just a one page recipe. Perfect. However, further reading (and the 21 individual photos!) revealed super-hero levels of complexity. First the “biscuit à la cuillère… now make a crème pâtissière… and a crème beurre… and now bring it all together to make a crème mousseline… after that “at the same time, casually whip up a French meringue and then make an apricot glaze….” WTF! Far too much effort.

I decide to go off-piste. I would use the ingredients for the biscuit à la cuillère, which turns out to be very similar to a génoise sponge base, top it with my mascarpone and then all my iffy strawberries.

n.b. A génoise differs from a Victoria Sponge in that there’s no butter, making it a little lighter and therefore slightly less excessive for this Thursday morning.

For the filling, I used a combination of mascarpone, double cream and sour cream.
Lemon zest (optional)

250g of strawberries, hulled and sliced. 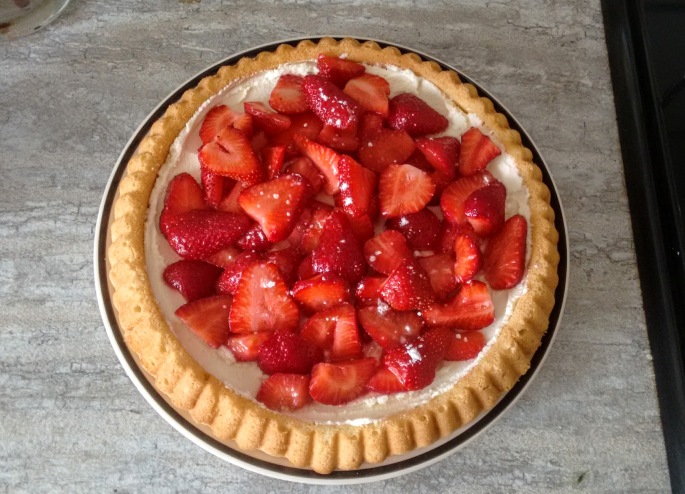 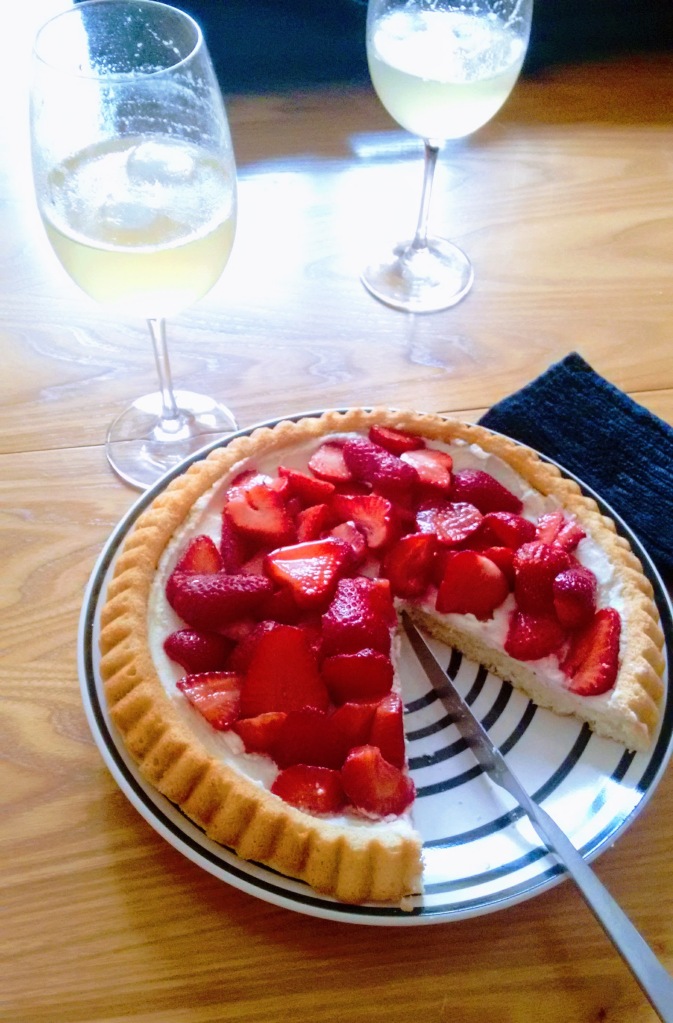 Ideas for how would I do this differently next time…?

I love the combination of strawberries and mint, or strawberries and basil. For a more elegant version of this cake, I would try to incorporate some more of those sophisticated savoury flavours… maybe even some very good quality balsamic vinegar…