“Slowly but surely,” is the answer.

At the beginning stages of a house renovation, it’s completely linear. Just bricks and mortar; walls and a roof. There’s nothing else. It becomes frustrating because you can’t say “well, these guys for X have been held up on another project so let’s do Y, while we’re waiting…”

Now we’re at a stage where the house is essentially built so we can start working on different elements simultaneously. It’s more satisfying, even if it does make you a little bit more crazy trying to keep all the plates spinning.

The electricians cannot be relied upon to do anything correctly by themselves.

Underneath is a photo of our bathroom-to-be. WC and bidet on the right, washbasin on the left by the window. We’ll have a small electric plug (the empty socket on the far left) and a light above the mirror (the tube sticking out of the wall.)

Now if you’re not familiar with the mechanics of wiring a house (I wasn’t until a couple of months ago….) you may not know that there’s a whole spider’s web of tubes and cables which run under the floorboards. They all have to be connected up and obviously linked to the mains entrance point. In this case, a tube is supposed to run along the floor to the socket and then up from the socket to the light.

It turns out though, that they’d put in the tube from the socket to the light but had forgotten to put in the tube which goes from the socket to the mains. We had a suspicion that they’d forgotten, so even though the walls had already been plastered and the floor was already filled in, we called them back and they were able to rectify it. (Hence why the passageway along the floor and up the wall is a different colour.) Imagine if we hadn’t spotted their error! 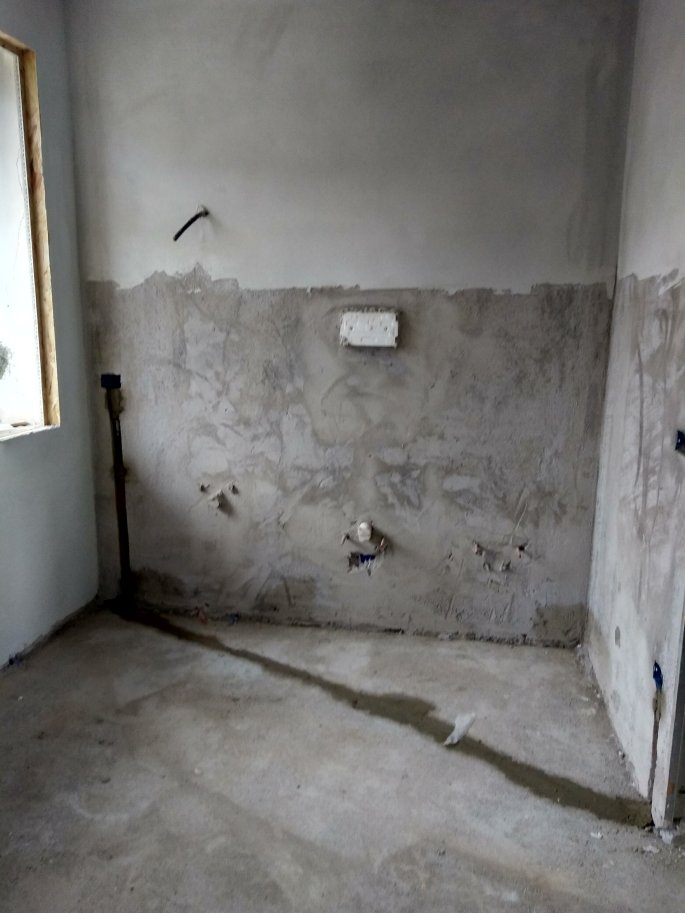 There was also a pretty funny moment when my kitchen supplier came over to check the last of the details before putting in the order. We had our technical drawing out and were measuring the distances for each of the sockets, the extraction fan and the cupboards now that the walls have been plastered to make sure it will all eventually fit.  We were going through the electric sockets step by step, counting, “1, the plug socket… 2, for the induction…. 3, another plug socket…. and 4, where’s 4??”

It turns out that the team who did the plastering inside forgot about the fourth and most essential socket. It’s clearly much easier for them to plaster over the entire wall, rather than work around the fiddly little electric sockets…. but it’s also their job to remember how many there were in the first place!

Fortunately, she and I borrowed a hammer from some of the other builders and, through trial and error, figured out where that hidden socket was located. Phew!

Lesson learnt: you really do have to check and double-check the builders’ work. Had we not, we wouldn’t have had any electricity in the bathroom nor any going to the fridge and oven!